We try to design an auto-aiming system mounted on AGV with limited computational resources.  Some visual sensors and IMU can be mounted on it.  We use computer vision algorithms to do localization. And we also want to implement a robust and accurate fire control system based on a PID controller.

RoboMaster is a shooting-based robot competition where teams could defeat their opponents through dealing damage to their robots, which, according to the game rules, can only be done by shooting at the armor modules of the opponents.  Various techniques have been introduced since the first competition to boost robots’ speed and acceleration and to escape manual aiming.  Therefore, robots need an real-time auto-aiming system to assist operator hitting enemy’s armor as accurate as possible.

We detect the target in the video frame and record the information from coding wheels or IMU if exists to  calculate  the  relative  pose  and  our  vehicle.   (If  we  have  ranged  sensor,  we  can  just  get  the  depth estimation directly.)We can detect the target in the frames, then the target position can be back projected to 3D space according  to  correspondences  and  epipolar  geometry.   In-frame  detection  can  be  done  by  some  native methods (Haar Cascades) or even machine learning-based methods (e.g.  YOLO, EfficientDet), and allthe detection algorithms are able to perform in real time. In detection part, the pattern we need to find has some features(one printed number and two light bars).

According to the pose and structure from tracking module, we can apply Kalman filter to do the simple prediction of the possible position of target for delay issue. Furthermore, it is also possible to leverage LSTM and KNN to predict the motion of targets (refer to CS239 Report:  Target Tracking with Kalman Filtering, KNN and LSTMs).

Suppose Tracking and Prediction module work, then the control module is just a simple dynamics problem.  Maybe PID controller is just enough.  Eventually, we may estimate the confidence of success hitting for each possible target, and decide which one to shoot automatically. Remote signaling from the operator is also required, as we need to control whether the robot should shoot or not. During the testing, we found it hard to run our program on real robot for survival reasons.  Firstly,there  are  only  two  robots  in  RoboMaster’s  lab  and  their  team  also  needs  them.   Secondly,  testing  on a full functional robot will make it hard for us to run wires for our system because of the complicated mechanisms on it.In order to test our control code and algorithm more comfortable, we built a small scale test platform. It is composed of two 2006 brush-less motors and a simple carbon fiber frame.  It’s the minimum configuration for us to test our program and we can easily install cameras or sensors on it to do any experiment we want. 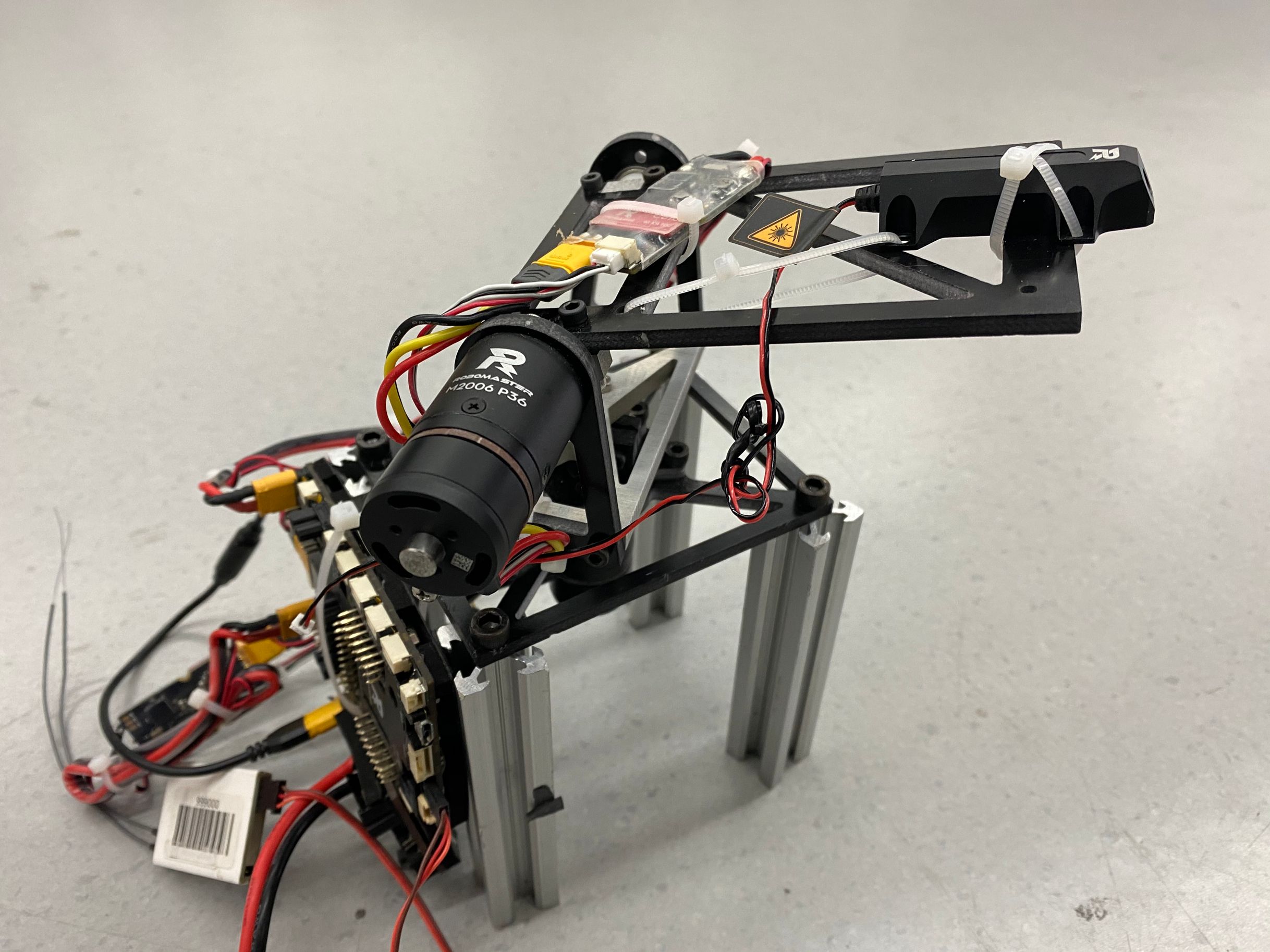 After successfully configure the motor and the laser, we added the camera to the gimbal and use hot glue to make the laser pointing at the center of the image of the camera. The hardware part communicate with the computer through a USB cable.  We use CP2102 module as a UART to USB converter.  One end of it is connected to the UART6 port of the develop board and the other end is connected to the computer.  In order to debug the system more conveniently, we added a remote control function. 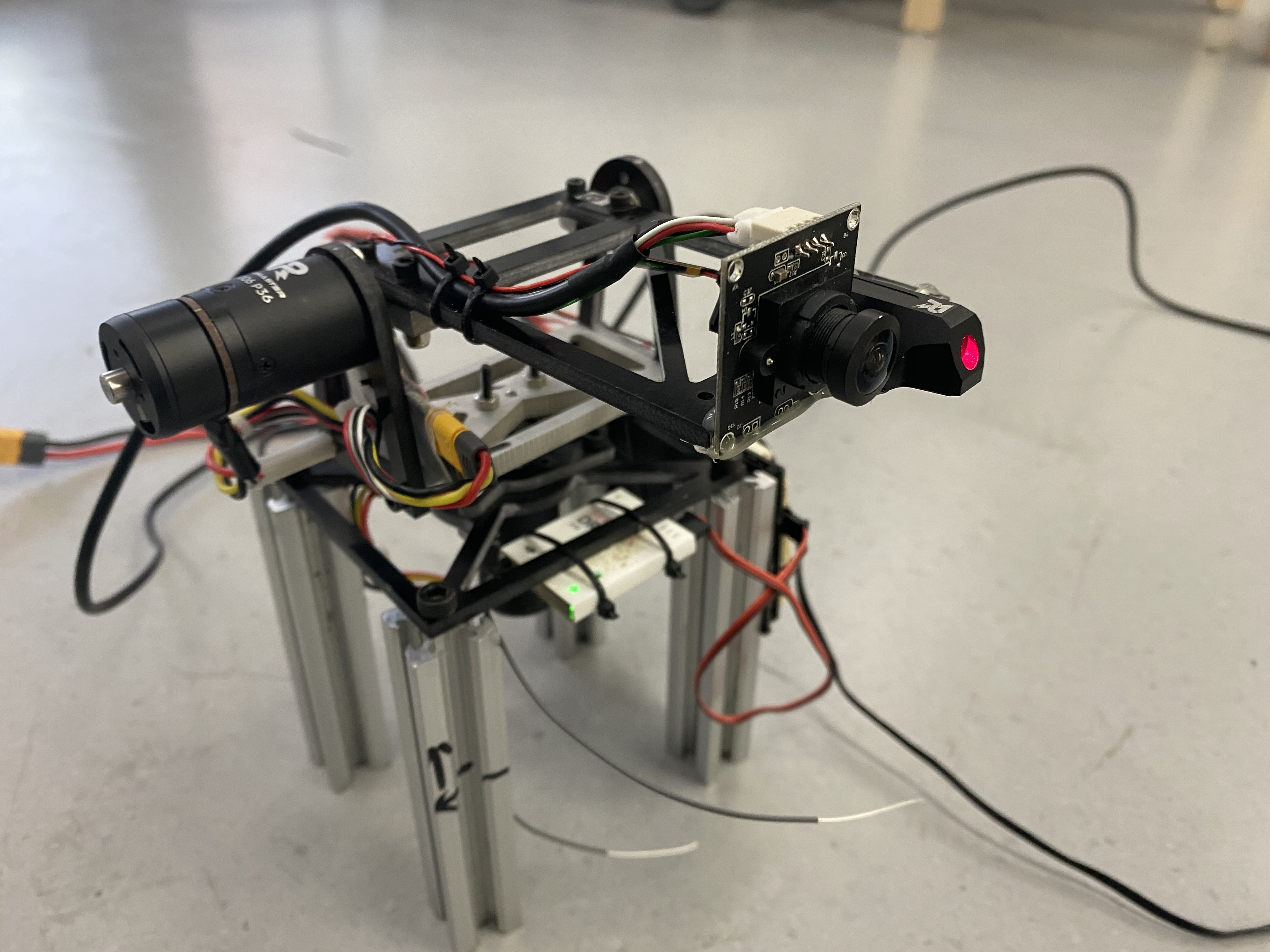 A remote controller is linked with the develop board through a receiver.  We can  then  control  the  gimbal  manually  with  the  joy  stick  on  it.   The  system  can  switch  between  auto tracking  mode  and  manual  mode  by  changing  the  position  of  the  switch  on  the  top-left  corner  of  the remote controller 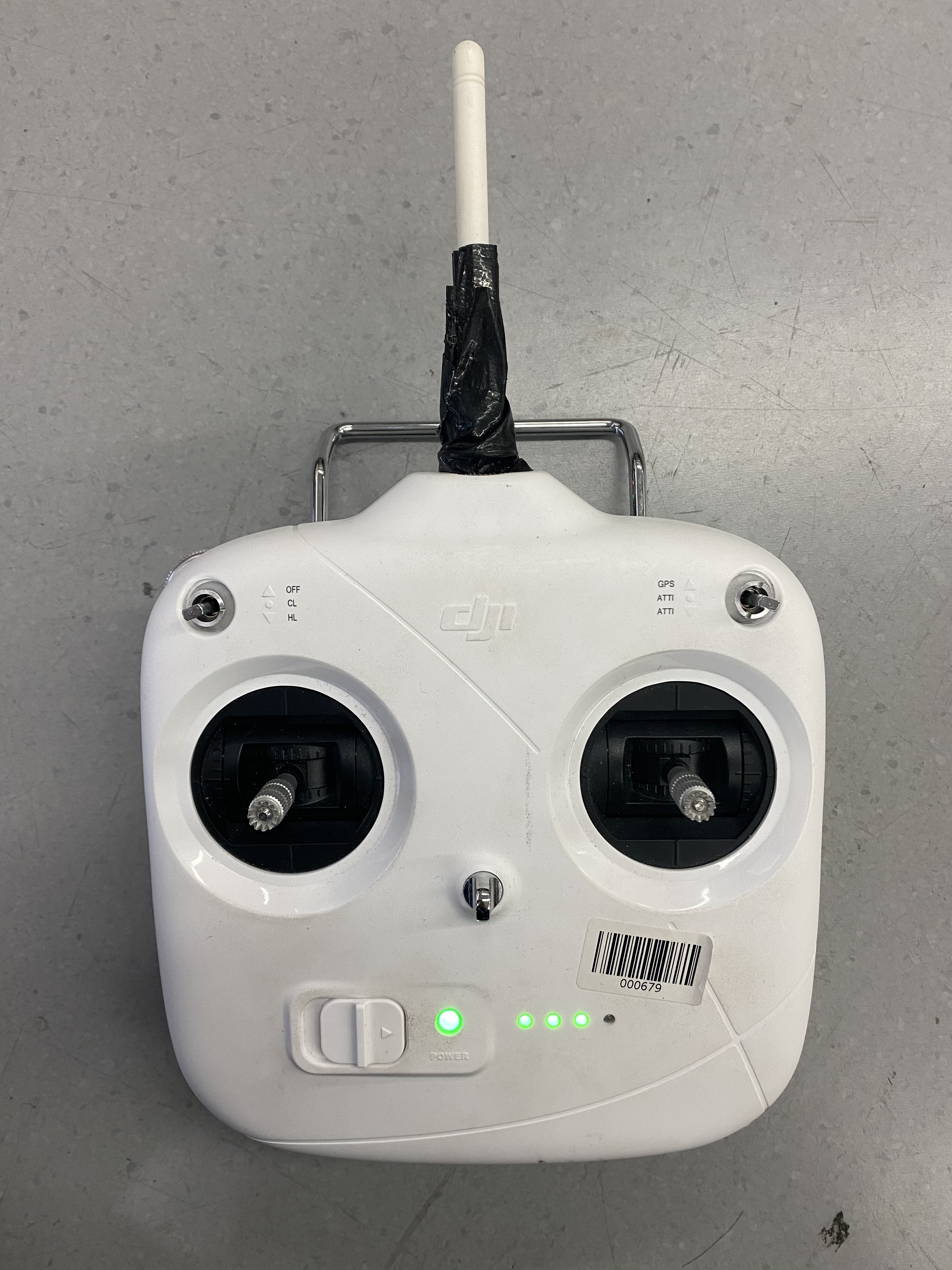 In our project,  there are 2 ROS packages,  one named infantry base,  which bridge the gap between serial and ROS communication, the gimbal can get and set pose information from this node.  The other name controller is our PID implementation for the gimbal, it get feedback from ros-topic and send control information.

We train the deep neural network by the collected datasets, and have important real-time and accurate detection algorithms.  With a accurate bounding box and the known size of the robot armor, we can get the accurate depth of the target. 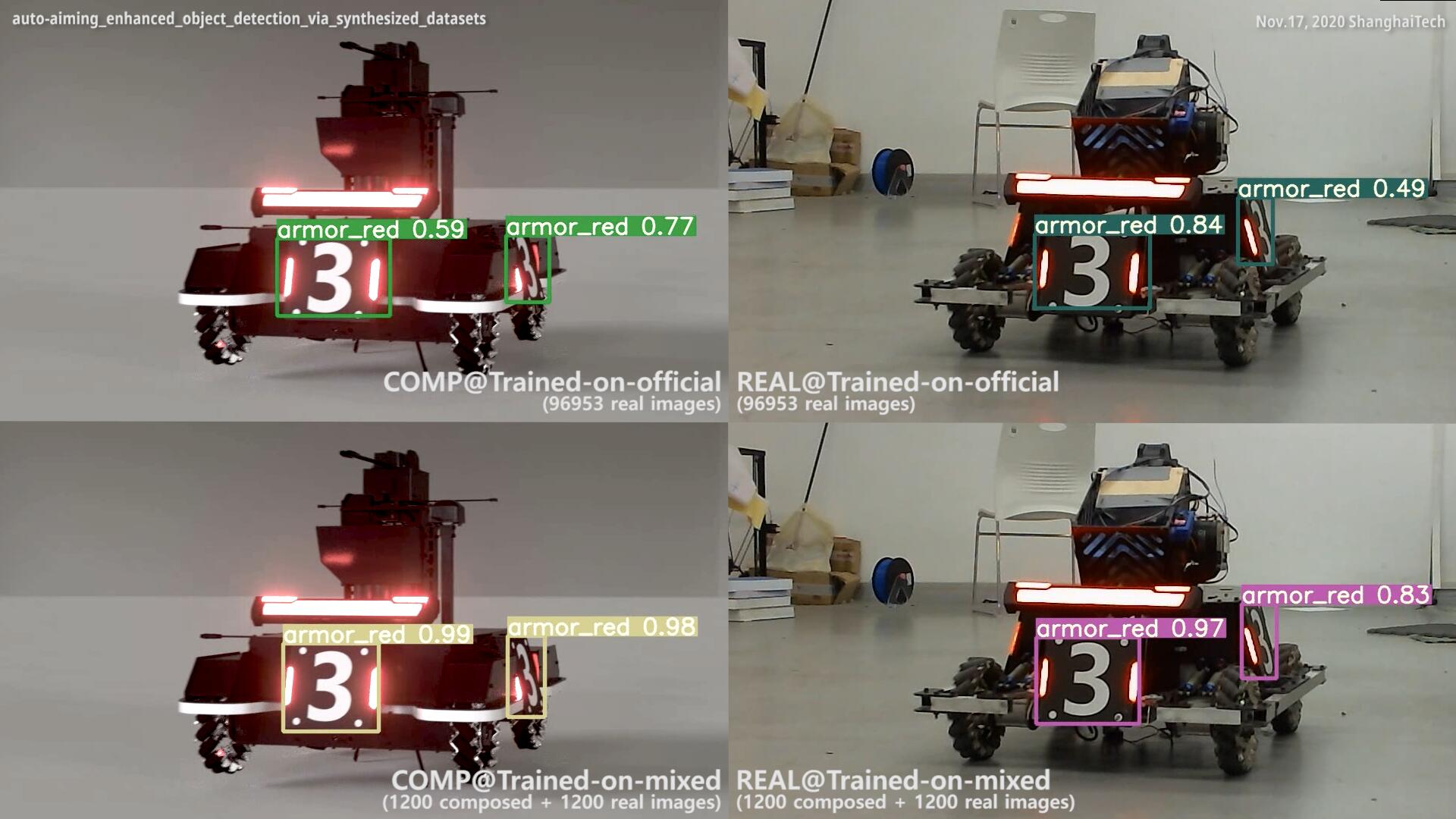 We tested our system in a indoor flat environment with artificial lighting.  The target is a Robomaster robot with standard armor board configuration.  The distance between the robot and the system is from 2 to 5 meters. 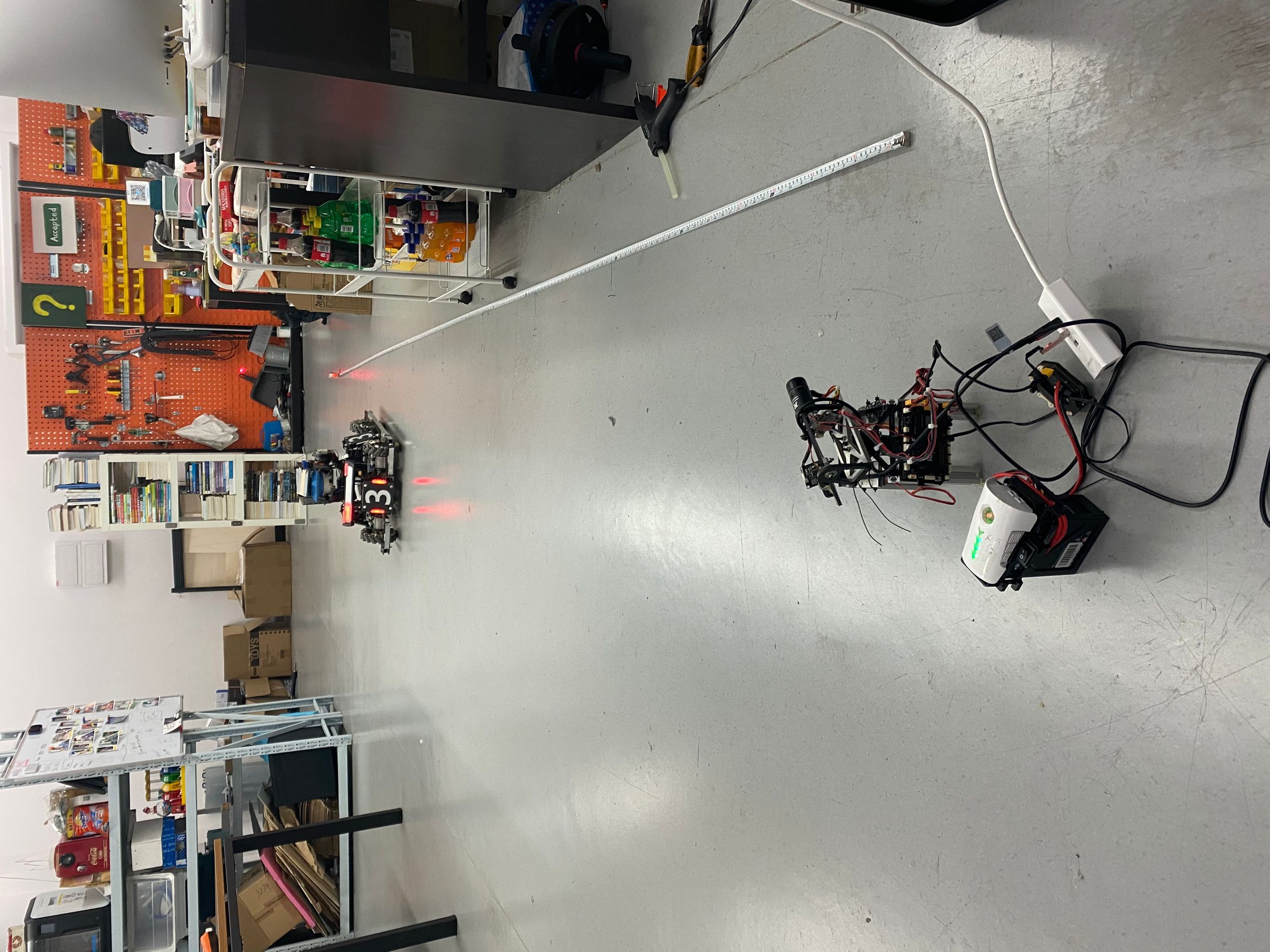